It’s a question people ask all the time.

That’s because investing in a quality burr grinder is one of the easiest and most affordable ways to dramatically improve your morning cup of coffee.

If you’re still using a blade grinder, forget about buying those expensive beans. Your grinder doesn’t have what it takes to make them truly shine.

But a Baratza burr grinder does.

So, Baratza Encore vs Virtuoso — what’s the difference between the two and which is right for you?

That’s what we’re here to answer. 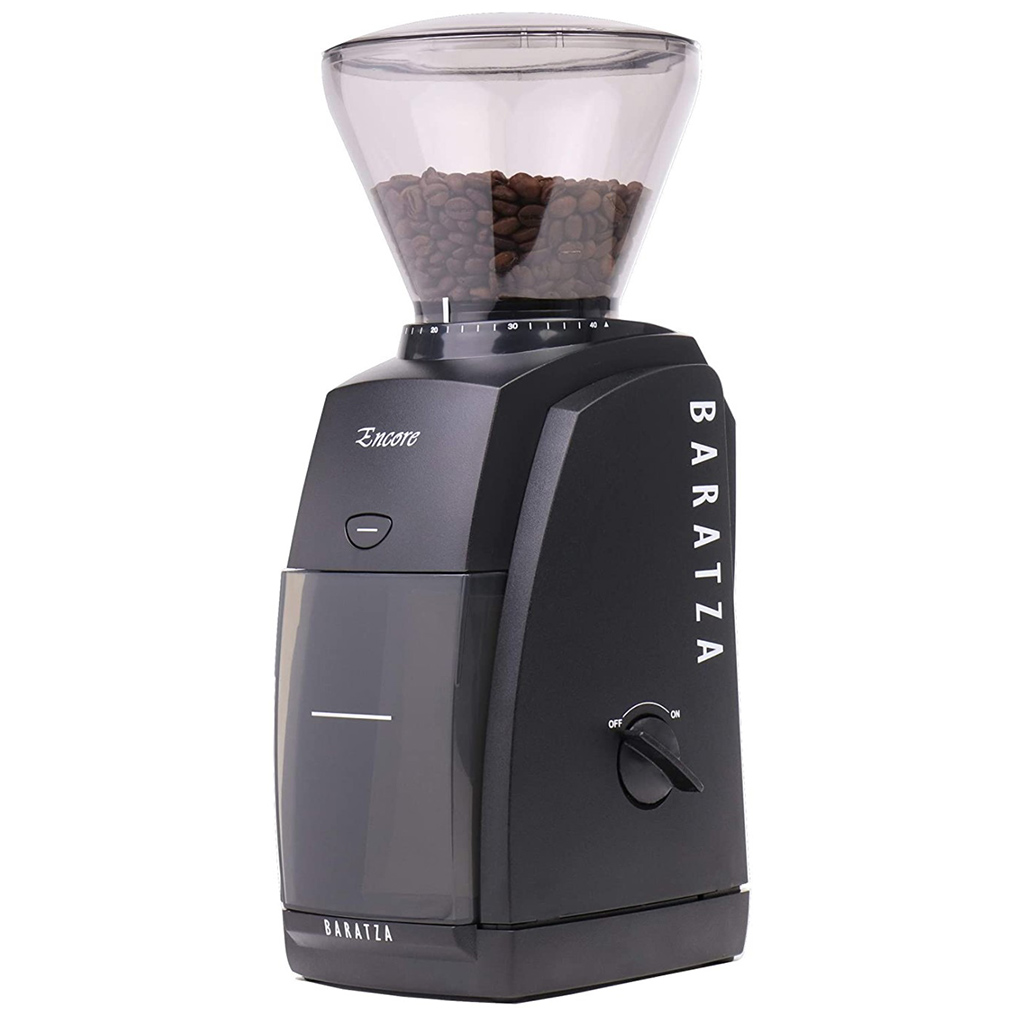 The Bottom Line
One of the most-recommended entry-level grinders, the Baratza Encore is an easy way to perk up your morning cup and features 40 different grind sizes from 200-1200 microns and an 8 oz UV-resistant bean hopper.
See it on Amazon →
See it on 1stInCoffee →
See it on →
Great Entry-Level Grinder 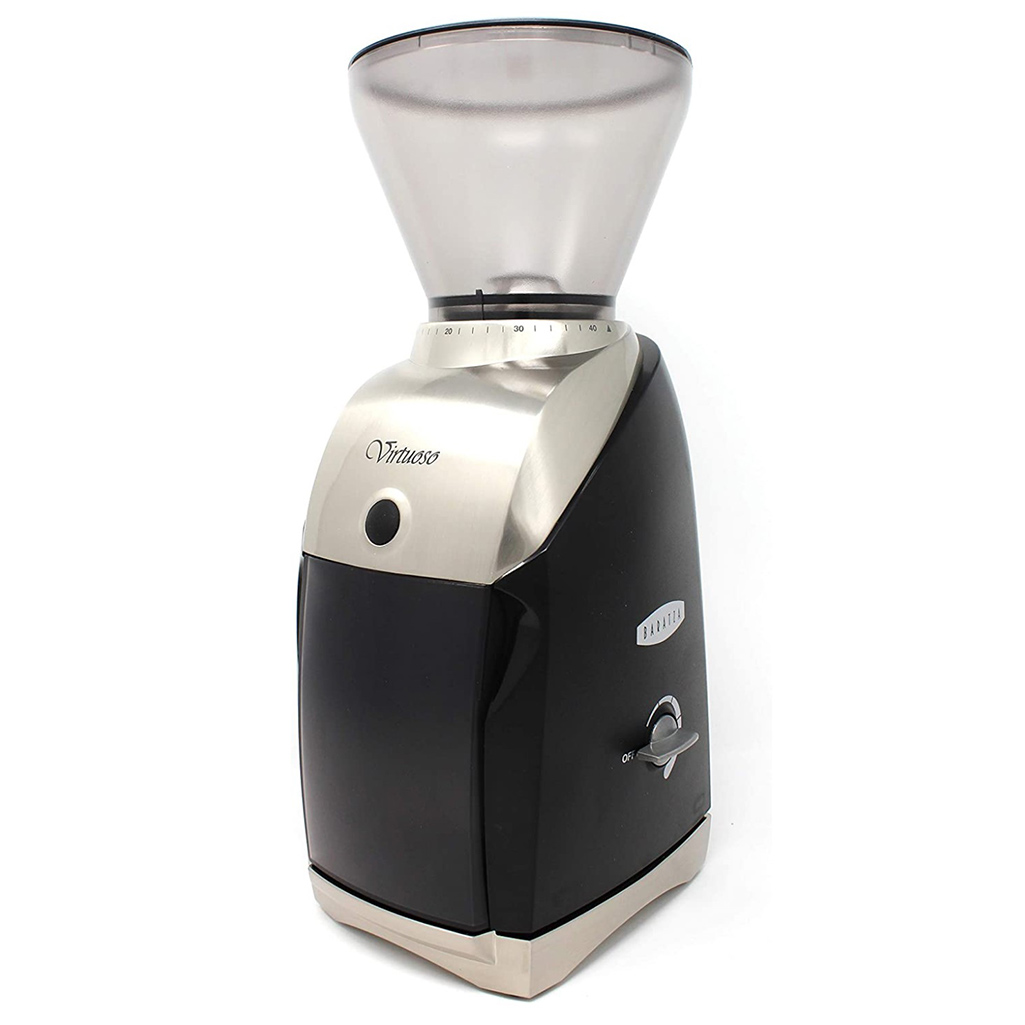 The Bottom Line
An upgraded version of the Baratza Encore, the Virtuoso features the improved M2 burr and higher RPM for a more uniform grind with fewer fines. The improvements are subtle, but they make a difference.
See it on Amazon →
See it on 1stInCoffee →
See it on →
Encore + Upgrade Burr Design

Baratza Encore vs Virtuoso: The Similarities

There are a ton of similarities.

Both the Encore and the Virtuoso are designed to be entry-level grinders for people who are either (a) looking to dip their toes into the world of burr grinders, or (b) are drip, pour-over, or manual coffee drinkers and don’t need the precision of a dedicated espresso grinder.

Baratza Encore vs Virtuoso: The Differences

But, of course, they aren’t the same grinder! These are the key differences.

Though both the Encore and Virtuoso have 40 mm stainless steel conical burrs, they aren’t the same burr. The Encore comes with Baratza’s M3 burr; the Virtuoso comes with the M2 burr.

There’s a subtle difference between the two, which you can see in the images below.

The M3 burr on the left, used in the Encore, has a duller, flatter cutting edge as it radiates downward from the top of the burr. The M2 burr on the right, found in the Virtuoso, has a sharper, steeper cutting edge. The M2 burr that the Virtuoso uses is actually the same burr found in the Baratza Preciso, which, as the name implies, is designed for precision espresso grinds.

However, the Preciso has been discontinued and replaced by the aforementioned Sette series.

The M2 burr on the Virtuoso delivers a more uniform grind with fewer fines, and is better suited to espresso than the Encore (if you’re not willing to spend up for one of the Sette grinders, that is). The M2 burr design also leads me to the next key difference.

With the M2 burr’s sharper, sleeker cutting edge, it’s able to grind much more quickly than the Encore’s M3 burr. The Virtuoso’s burr also rotates at 500 RPM vs the Encore’s 450 RPM. Those two factors combine to yield the following grinding speeds:

Faster grinding speed means less contact time with the burr, which means less heat generated in your grounds. Less heat is a good thing, as heat is associated with undesirable flavors in your resulting cup. But to be honest, any differences in temperature are likely negligible for the home barista — unless you’re going to be grinding many servings in succession.

Also, fast grinding speeds mean less time waiting for the grinder to finish. If you save 10-20 seconds every single day, that’s 1-2 hours saved every year!

(Just to be clear, that was sarcasm.)

Virtuoso Has a 60 Second Grinding Timer

Both grinders have a rotating knob on the right side of the machine (as you’re looking at it). The difference is that the Encore has a simple on/off switch whereas the Virtuoso has a timer knob with a maximum grinding time of 60 seconds.

Virtuoso Is Made From Superior Materials

As Baratza’s most entry-level grinder, their goal with the Encore was to provide a quality grinding experience for the lowest possible price. That means a 100% plastic casing.

Which Grinder Is Right for You?

Ah, my favorite question. Ready for your least favorite answer?

Both the Encore and the Virtuoso are designed for home baristas looking for a less expensive but still well-designed burr grinder for their coffee setup. These two grinders are best used for brewing standard coffee — French press, AeroPress, drip, pour-over, etc. — but will suffice for espresso in a pinch.

If you’re an espresso drinker, I really recommend you start your search in the Sette series.

When is it worth upgrading from the Encore to the Virtuoso?

This is the key question. When push comes to shove, the Virtuoso is the better grinder. It grinds more quickly with fewer fines than the Encore, and fewer fines is a good thing for all standard brewing methods. Regarding the 60 second time, I don’t necessarily think it’s a huge deal; I don’t mind waiting to switch the Encore’s knob to the off position when I’m done grinding.

The grinder is the most important part of your coffee setup, so if you have the wiggle room in your budget to upgrade to the Virtuoso, I’d invest in what is objectively the better machine. But if you want to go with Baratza’s true entry-level grinder, the Encore won’t fail you.