Keurig Green Mountain has been an innovator in the pod-based coffee arena since the late 1990s.

I know, can you believe it’s been that long?

In that time we’ve seen product lines come and go as the single serve giant tries to meet (and anticipate) the demands of the American public.

This post looks at the company’s product release timeline, specifically the discontinuation of the Keurig Vue line.

Why look at the whole 20-year timeline?

Keurig has so many different models that it can be hard to understand the differences between them all.

Keurig discontinued their Keurig Vue series during the summer of 2014, right before their Keurig 2.0 series was set to debut.

Keurig wanted to roll the defining features of the Vue series — larger serving sizes and additional controls/functionality — into the Keurig 2.0 series with pod scanning technology.

Basically, once the Keurig 2.0 line hit the market, the Vue series was completely redundant.

However, Vue brewers still can be purchased online.

I wouldn’t recommend purchasing a Vue brewer because it’s very difficult to find K-Vue pods, and the ones you do find will be old and stale.

If you do have a Keurig Vue machine and are having difficulty finding fresh pods, take a look at this pod adapter! 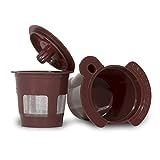 With this adapter, you can get fresh coffee two ways:

No more old, stale coffee for you, and no need to buy a brand new Keurig machine.

I find it interesting to look at Keurig’s coffee maker timeline, as it sheds light on the company’s direction:

Note 1: At this time Keurig has a lot of balls in the air. Not only are they maintaining their flagship Keurig 1.0 line, but they’ve also introduced new lines for larger single serve coffee (Vue), specialty coffee (Rivo) and full-carafe coffee (Bolt).

Note 2: Additionally, the popularity of pod-based coffee machines has (unsurprisingly) led to the rise of many other companies selling unlicensed Keurig pods, which really aggravates the Keurig Green Mountain machine. This leads to what happens next: The Great Keurig Consolidation.

Do you have any comments our questions about the Keurig Vue was discontinued or Keurig’s product timeline in general? Comment below!

Bryan is former barista and coffee lover who founded The Coffee Maven to write about all things coffee and espresso. The Coffee Maven is dedicated to providing the correct information, which is why our Buyer's Guides and product reviews are among the web's best. We always list the proper technical specs and give easy-to-digest visuals whenever possible. There is a lot of misinformation in the coffee world, and The Coffee Maven prides itself on being the most accurate. You can follow Bryan on Facebook and email him here.