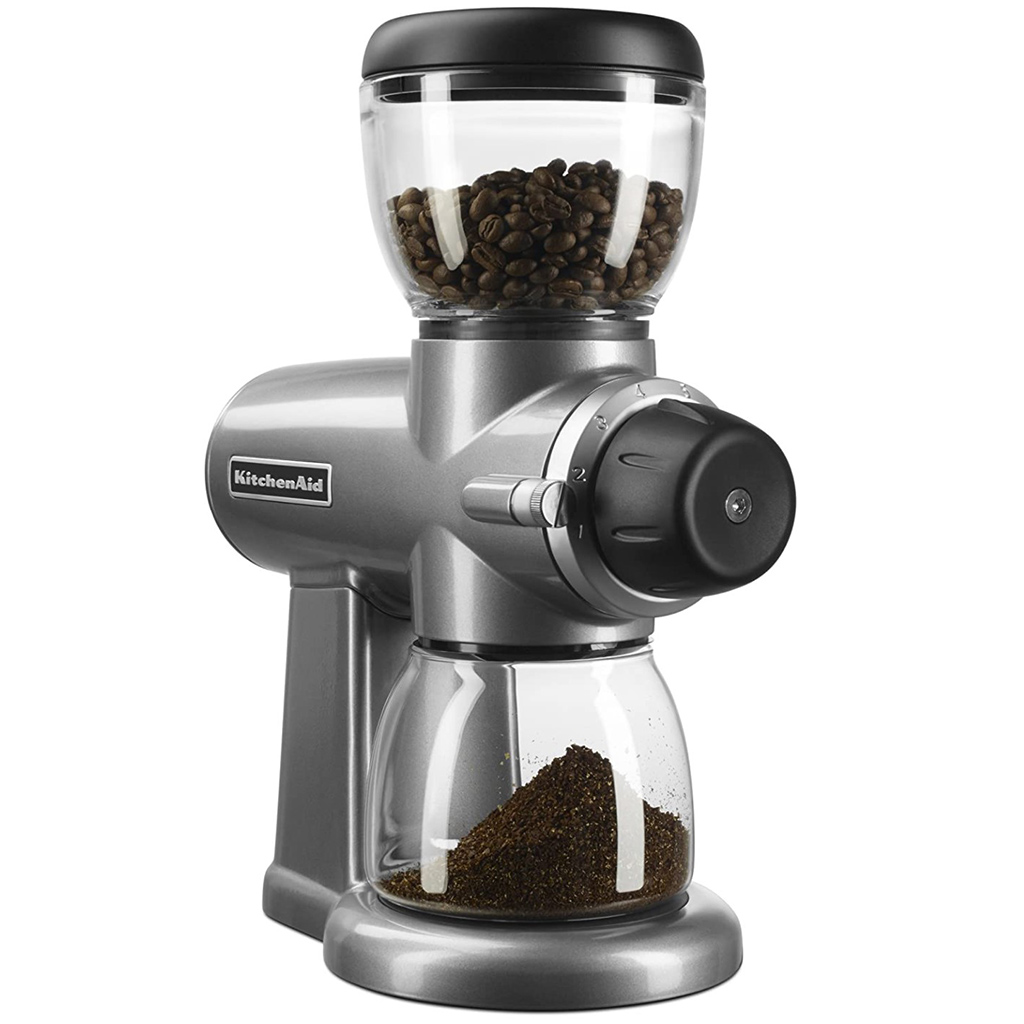 Let me get this out of the way: I’m a sucker for KitchenAid’s awesomely retro design and sturdy die-cast metal construction.

The KitchenAid capsule-based Nespresso machine? Easily one of my personal favorites.

Design aside, the KitchenAid Burr Grinder is a high-quality model from a reputable brand. It’s KitchenAid’s only conical burr grinder, which easily makes it worlds better than the blade grinders below.

Depending on which color you get, the model number will append the letters in parentheses above. So an empire red model will be the KCG0702ER.

Overall, the KitchenAid Burr Grinder is worthy of it’s great reviews on Amazon and has all the features you’d want in a quality coffee grinder.

Is the KitchenAid Burr Grinder for you?

Is KitchenAid Burr Grinder for you?

The KitchenAid Burr Grinder is great for those who want a quality burr grinder with great durability and proven performance.

While the price on these machines fluctuates frequently, I will say it’s a little overpriced (likely because of the die-cast design, which again I do love).

For a similarly high quality grinder that’s usually a little cheaper, check out the Baratza Encore.

Burr grinders actually grind your coffee to the desired size. You want a fine grind? The burrs are aligned closer together to grind the coffee beans until they’re small enough to fall between the two burrs. There are two types of burr grinders — conical and flat — which have differences of their own, but they’re both vastly superior to blade grinders.

The major benefit of burr grinders: A more even and consistent grind for a more predictable and balanced extraction process.

Blade grinders are like a food processor or blender with a spinning blade that pulverizes coffee beans by sheer force of impact. Unlike burr grinders you can’t do anything to set the grind size except chop for more or less time. The resulting ground coffee lacks any consistency in size and produces an inferior cup of coffee.

The major benefit of blade grinders: They’re much cheaper.

So we’ve established that the KitchenAid KCG0702 is a stainless steel conical burr grinder, which automatically makes it the best KitchenAid coffee grinder on the market.

What else should you know about this KitchenAid coffee grinder?

It has a rather small bean hopper capacity.

This can be either a pro or a con depending on your perspective. For me it’s a pro. The smaller capacity means it takes up less space and I get to refill it more frequently with fresh coffee beans stored away properly! If you don’t like refilling your bean hopper as often, maybe this is a con.

Some coffee grinders, like the DeLonghi Dedica, allow you to attach a portafilter for seamless filling before every use.

The KitchenAid KCG0702 doesn’t have that functionality.

Now, that doesn’t mean you can’t just hold the portafilter under the grinder while you dispense the desired volume of freshly ground coffee (you absolutely can) but there isn’t a specific design feature accommodating it like other models have.

Yes, it’s aesthetically pleasing, but I find it functionally flawed. I brew with an Aeropress and grind a single serving of coffee every time. It’s very hard to scoop out every last bit of coffee grounds with your standard scoop, and the glass container’s shape isn’t very conducive to pouring into my narrow Aeropress. If you’ll be grinding enough for whole pots of coffee, this point is moot. But for precision grinding, it’s a little cumbersome.

Check out the KitchenAid Burr Grinder! 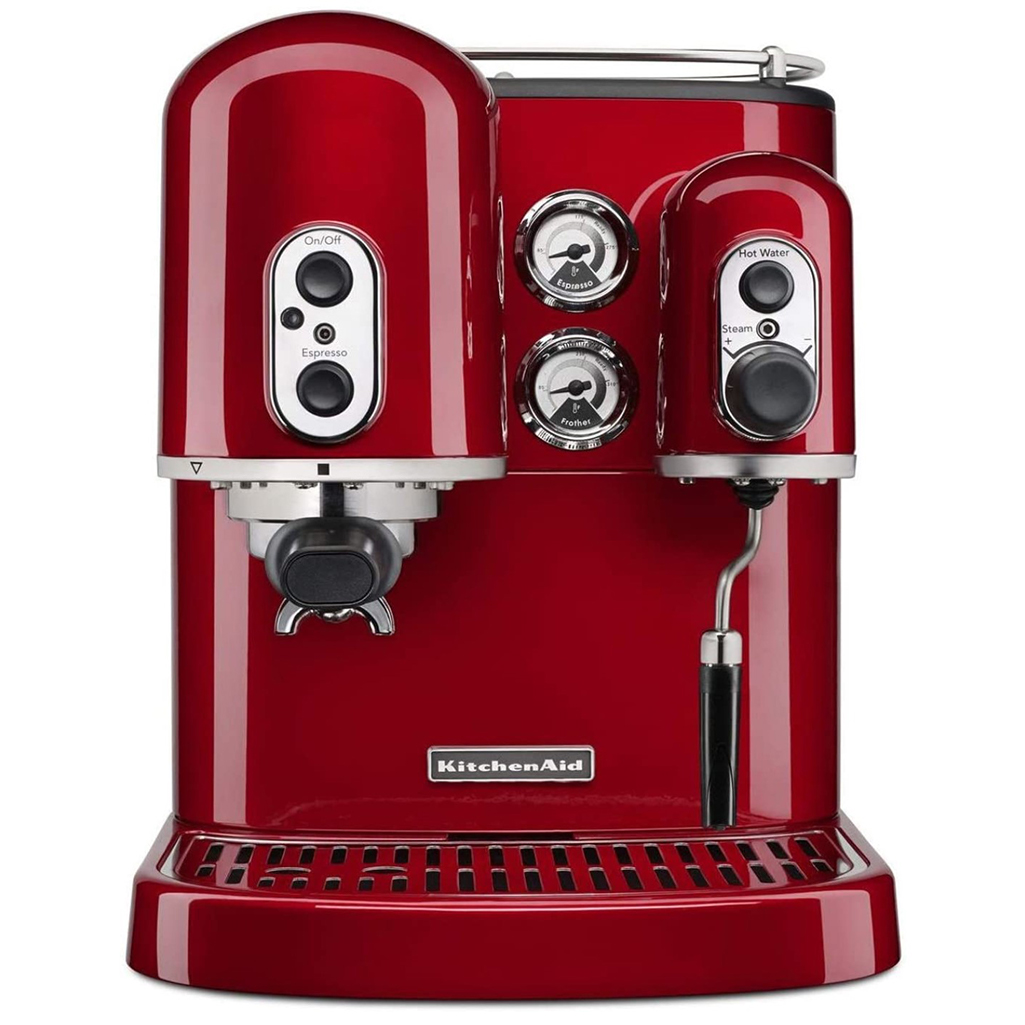 Overall Rating: 93
A beast of a machine, the KitchenAid Pro Line is a UL Commercial listed machine that works just as well for home use. Made by KitchenAid like only they know how, it's durable and ready to meet your espresso needs.
Learn More → 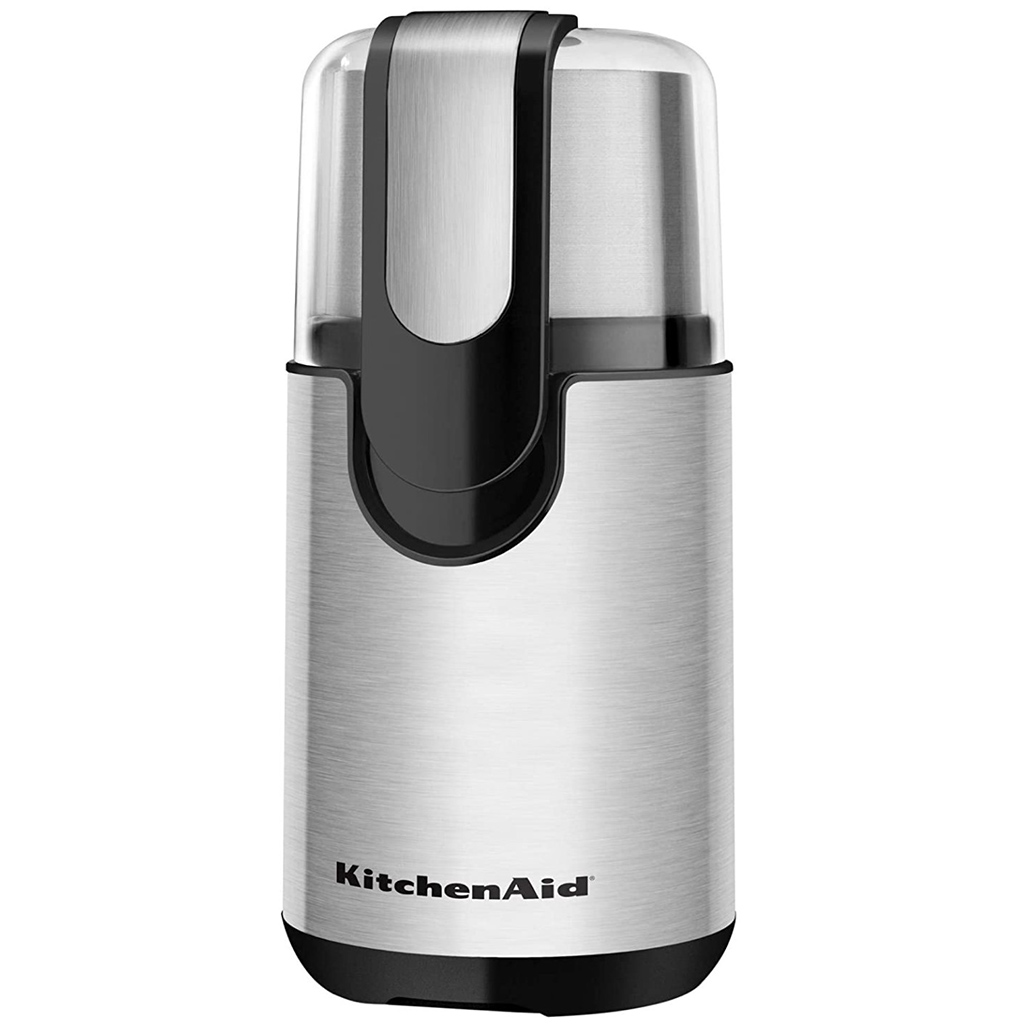 Overall Rating: 80
Blade grinders aren't known for quality of consistency. If that's important to you, check out the KitchenAid Burr Grinder. But if you want something small, inexpensive, reliable, and convenient, check this model out.
Learn More →
About The Coffee Maven